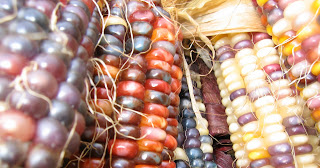 Mother Nature is dramaticlly letting us know it is a time of change. Once verdant canopies are turning an array of reds, oranges, yellows and brown that is just breathtaking. Unlike the spring season with its continuous tender, green sprouting, budding, and flowering flowing into the fruiting season we are witnessing exhaustion. My vining plants are showing signs of the wear and tear as their leaves are browned and shriveled; late settling fruits hang on seemingly suspended, and the bees are searching for a new source.

All is not so desparate for in her grace a new crop of subterrain heartiness is developing -- vegetables that don’t mind the decreasing light and cooling days. And, the green, leafy vegetables like broccoli, kale, Brussels sprouts, sorrel and lettuce that wilted and pooped-out during the dog days are up and running mad, renewed by this change. Thank goodness for radishes, those fast maturing tubers give a blush of color as my palate turns to the hues of green, and brunt umber. While I will miss the overwhelming output of the cucumbers and the eight different herbs options to season the night’s meal I am already relishing in the turn of the wheel. 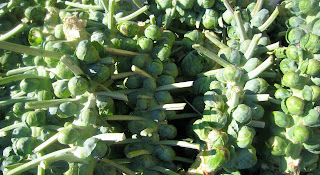 Wash the Brussels sprouts and then peel one or two outer leaves, and trim the base.

Shred the Brussels sprouts, fennel, and kolrahbi. Place them in a large work bowl along with all the other ingredients. Toss every well to disperse all the flavors. Refrigerate for 4 hours to overnight before serving. 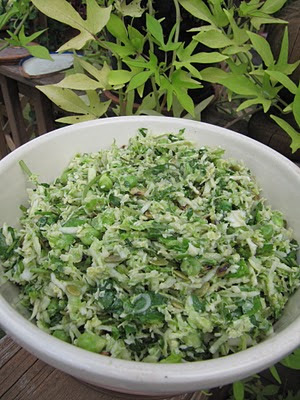 Posted by Unknown at 7:50 AM No comments: 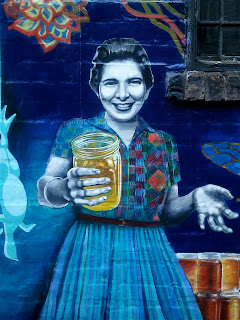 Ever since last spring I have been dedicated to three new but old pans. Last winter a cousin passed on, after a long-lived life and assisting in cleaning out the house I salvaged from the trash heap a trio of well-seasoned, family worked cast iron pans. My cousin and their family lived in the same house for the about 60 years, and I can only imagine how old the skillet, dutch oven and grill pan were. They are a testament to fact that cast iron, for me, are heirlooms to be cherished and passed along. They are so well seasoned, with a layer of carbon so set that I fear not it rusting, though I still never use more then a soft sponge and always dry it over a flame for there would be no greater loss than those years of dutifully preparing the family meals that are deeply enbedded within.

My cousin who onced owned these pans was one of the first foodie I had ever known. I remember back when I was in my late teens she came into New York from Atlanta for a culinary run. I was a bureougning foodie myself, and spent the day running around Manhattan with her on the hunt. I totally recall a small, floor to ceiling crammed stored in Chinatown where she was told a dragon and butterfly cookie-cutter could be found. In cleaning out the kitchen I was hoping to come across those detailed, delicate cutters perhaps her daughter found them and took them home with her. A cookbook collection spanned 5 decades and was rife with local self-published “Junior League” style contibutions that represents the anthropological development of the area and time – I scooped those up; even though I know I was never going to make a 7-up  Cake or Coca Cola Chicken.

I would never have thought that I would have ended up a chef, a hoarder of pre-loved rolling pins, apothecary jars and cast iron skillets. The history of food and cooking inspires, informs and releases me to create for future accumulators of the past. 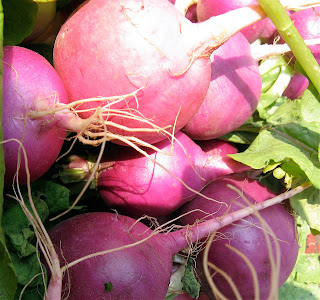 Heat an eight-inch cast iron skillet over a high heat, then add the shallots and olive oil. Cook the shallots until golden brown, then mix in the turnips, radishes, beets and garlic.

Sauté the vegeables for about 5 minutes, until just tender then lower the heat, and mix in the basil, salt and pepper. 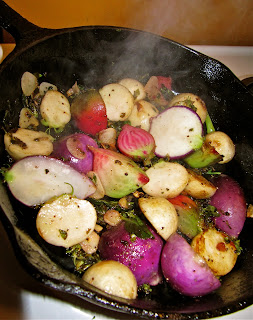 Serve warm.
Posted by Unknown at 7:02 PM No comments: 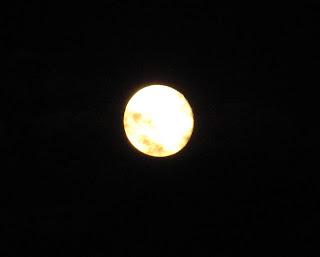 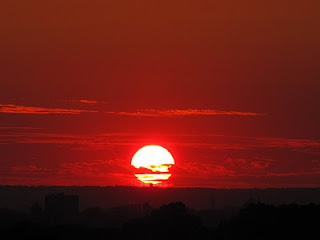 A sun rising a tad lower 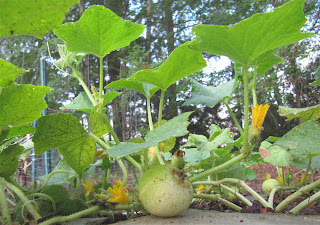 In a clean 2 quart glass jar mix all the ingredients together to thoroughly combine. Secure a tight fitting lid onto the jar, and refrigerate for 5 days before serving.