One of My Garden's Fragrant Notes

While becoming a member of the Atlanta Botanical Gardens a few years back I started chatting with one of their resident botanists. Of course, I was making inquiring about growing all things culinary. I lamented how I was not sure if I was going to be able to procure some of my more esoteric herbs in this unfamiliar city I found myself in. Curry leaves was one of the plants I wondered if I could grow myself, and to my absolute surprise he said he propagated them and had a few for sale. Immediately I made arrangements to get one. 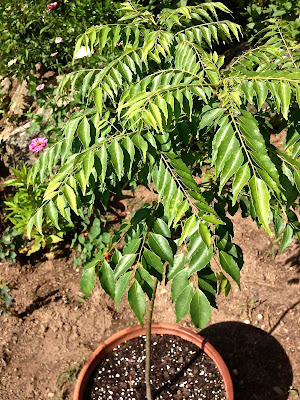 The precious 5-inch tall plant came with two pages of instructions and came with the warning that they are not the easiest to establish and maintain. I did not let it get over watered, and made sure the sapling had plenty of sand mixed into its soil for drainage. I fed it a suspicion of the fertilizer, as was recommended -- I would be able to snip a strand of its highly perfumed output? Winter set in and it took up residence in a western facing window. By the time we were two thirds through winter its leaves clung precariously to the branch, and a mere touch would send them drifting down into the pot. I feared I had killed it, for the plant had the look of the Christmas tree from the Charlie Brown holiday special. I could not give up on it, and I fed it some of its “tonic.” As late winter morphed into a quick spring with even more light flooding in the curry leaf plant exploded with a verdant umbrella of leaves renewing my hopes and dreams.

Its life returned, and so once again it was returned to the outdoors to spend the warm months basking – flourishing. What I could have never expected was twenty-four straight days of rain. Almost everyday had a soaker come through, and with the sun making fleeting appearances, drying nothing up. I move the curry leaf plant to a more sheltered spot fearing a wind gust would just simply uproot it. I mean bigger, more well established trees have toppled over.  Rather my herb plant that came with two pages of instructions thrived – clearly a monsoon season is what it really wanted.

In a 1-1/2 quart saucepan add the water, yogurt, onion, chili, curry leaves, cardamom, mustard seeds and salt and bring to a full boil. Then rain in the grits stirring, using a whisk, as you add the grits – this is to prevent the grits from clumping up. Lower the heat to a simmer, and stir the grits mixture for 5 minutes. Then place a lid on the saucepan and cook for 20 minutes.