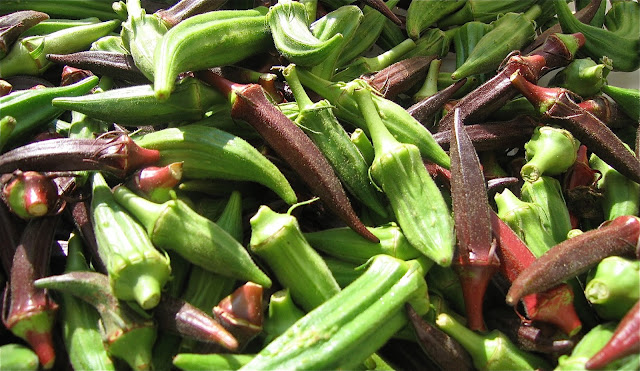 I was in my early twenties and visiting Austin, Texas for the first. I fell immediately in love with the “keep it weird” city – perhaps it was the Drag Queen Scavenger Race down 6th Street or the Shiner Boch I was sipping as I watched spiked heeled racers hobble by that led me to believe I had fallen down the rabbit hole.  Houston wasn’t this arousing.

I was there for work, and since it was the end of the workweek I decided to stay for an extra day. I got out to Lake Hippie Hollow where my lack of appropriate bathing attire turned not a single head. Rhythmically I bounced along to the sounds at the Continental Congress. I even bought a pair of snake-skinned-cockroach-killing cowboy boots. I was taking it all in. So, it made prefect sense that I would make self available the local foods – chicken fried steak with thick white gravy; bar-b-que, I mean bar-bque; and a known by alien food – okra.

Now, I was born in the Deep South, which I always said gave me right to, y’all. However, I did not make it a full year before my parents decided to repatriate to the north. It was not a food my mother brought back as part of her cooking arsenal so all I really knew about it was it was fried – like zucchini just minus the lemon and parmesan. I was game but this version was not fried rather pickled. I love pickled cucumbers, green tomatoes, onions and the like so I figured why not – because upon first bite a viscous slim filled my mouth and refused to be washed away by bottle after bottle of Shiner Boch. How could this be? This iconic vegetable was that terrible.

It would be years before I dared that bite again. And, I could never imagine that I would grow a couple 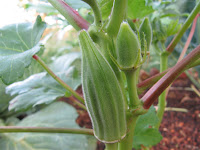 of varieties in my garden that have become summer favorites, cook it in various fashions and freeze fresh cut okra for winter consumption. I have learned to avoid them if they are longer then about 2-inches in length, and acid (lemon, vinegar, tomato) are the best ways to mitigate that overwhelming reaction of YUCK. I have even taken to pickling my own though only small ones make into my jar which become the prefect garnish to a Bloody Mary.

Use orka that is no longer than about 2-inches in length – these will be less slimy. Wash the orka well under cold water.

In a 2-quart saucepan bring 4-cups of water to the boil along with the salt, and boil for about 4 to 5 mintues.

Into the jar place the okra, paparika, black peppercorns nad the vinegar. Once the water/salt has boiled pour it over the okra. Fit the jar with a secure lid, and refrigerate for a minimum of 4 weeks. 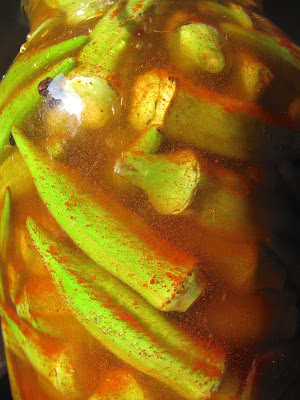