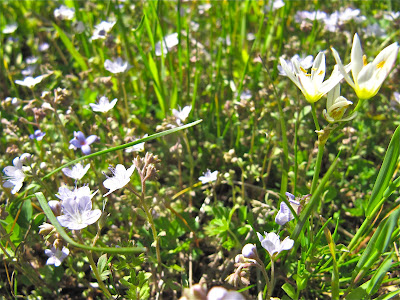 The most difficult time, food-wise, is that period between last frost and first harvest. The air starts to warm up, layers are shed and life shows signs of its return. It is the lag between that moment of relief from the suppressing weight of winter, and the frivolity of spring that gets to me. Not that I am not grateful to leave the house with just a quick throw of a jacket nor am I blind to the beauty of a field of wildflowers. None of this ends up on my plate, and the dearth of “just picked” is downright depressing. 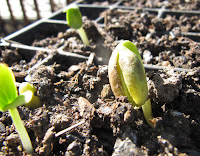 I have nascent lettuces that sprouted during the ping ponging weather of the past month but they are a mere inch tall, and I would have had to sowed seeds throughout the entire backyard in order to make a micro-greens salad. My tray of seedling that have been nurtured in a warm, sun-drenched spot in the house have sprouted, and they will hopefully present plenty of tomatoes, cucumbers, peppers and pinto beans come August. The sorrel has re-emerged but I dare not snip a leaf yet. A couple of early rising asparagus have heard the alarm that spring is here – not yet enough to make a meal around, but I will try.

Perhaps, the greatest April Fools joke is the belief that nature will respond immediately to this warming trend and allow me to harvest a basket of English peas for tonight’s dinner. Unfortunately, I fear not, and so I wait and struggle to think what do I feed my family tonight. It is this in between time that makes me summon all of my culinary resources to create a moment that is as satisfying as a wedge of watermelon that is ten minutes from the vine.

Clean the mushrooms with a damp kitchen towel and roughly chop them.

In a fine mesh colander rinse the morels under running water to rid them of any dirt and grit. Soak the morels in 1/2 cup of boiling water for 30 minutes. Roughly chop the morels and reserve its soaking liquid.

Heat a 10-inchsauté pan to hot and add the olive oil.  Sauté the shallots until lightly golden and then add the garlic and, the fresh mushrooms and continue cooking for 5 minutes.  Add the brandy and morels along with the mushroom liquid.  Bring to a boil and then reduce to a simmer.  Cook until the liquid has evaporated.  Mix in the pine nuts, herbs and season with salt and pepper.  Cool the mushroom mixture.

Lay a sheet of phyllo out flat and using a pastry brush lightly paint the sheet with the melted butter. Always start brushing the phyllo with melted butter from the outer edges working your way inward as the phyllo starts to dry on the outer fringes first.  Place an additional 5 sheets on top of this first one buttering each layer. You must hold the phyllo you are not working with spread out flat under a damp kitchen towel in order to prevent it from drying out. Spread half of the mushroom mixture along the length of the bottom third of the phyllo.  Then carefully roll up the phyllo over the mushroom mixture and continue to roll the mixture completely up into a tight log.  Once you have rolled the strudel half way you will have edges that you should fold in just like if you where wrapping a gift, and then continue to roll the strudel completely up.  Transfer to a parchment lined baking tray. Cut three to four slashes in the top of strudel. These cuts allow steam to escape and helps prevent the strudel from bursting.  Lightly brush the phyllo with some melted butter. Repeat this with the remaining mushroom mixture. Place the strudels in the oven and baked for 15 minutes or until golden and crisp.  Slice the strudel on an angle while warm and serve.