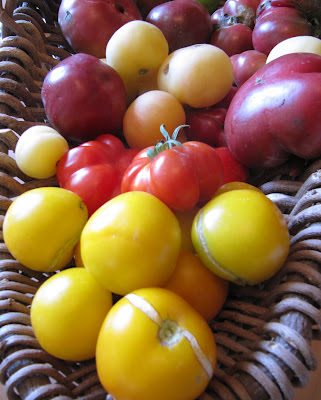 Last year I had the idea to save the seeds of any tomato I ate that were too fabulous to let go of. I ended up with a small plastic bag half filled with flat, tiny seeds. The one thing I forgot to think about was separating the various varieties in that storage bag that contained about 7 to 8 different types. So, earlier this spring when it was time to sow seeds I pulled out the bag and was confronted with my folly. In truth, I thought it rather funny, and since I only saved seeds of tomatoes I adored I figured whatever showed up would be welcomed. That is if my seed saving worked in the first place. I was guaranteed aunt Ruby and Sicilian saucing tomatoes because I purchased those seeds, and they were still in their original packets. Within a few weeks it become clear I might not know what I am doing when it comes to filing away seeds in an organized manner, I did know how to save them. Unfortunately, a nascent Aunt Ruby looks no different from an Evergreen, and therefore I was forced to wait to find out what the twenty seedlings would grow up to be.

The mystery of my tomato season has been revealed – they are yellow tommys, Cherokees, peach tomatoes, Sicilian saucing, and big, plump aunt Ruby swelling to an impressive heft. They are coming in fast and furious. Hokan has bought me a small chest freezer, one that he cannot fit in. Where he got the idea I consider giving up previous freezer space to stash his body I have no clue. All I know is without it being my birthday, half birthday or his birthday I got a chest freezer, and an item that has been on my bucket list for ions…checked!  I have already stashed away perfectly ripe tomatoes in my new toy, and filed away according to color – reds with reds, yellows with yellows. As for future seed saving, I think I’ll stick to my system of not knowing I ended up with a surprise bounty and a chest freezer. 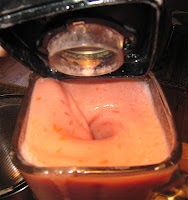 In a blender process the tomatoes till smooth – it should yields about 4 cups. Pour the pureed tomatoes into a fine sieve, and allow it to drip into a bowl.

In the meanwhile, in a 1-quart saucepan place the sugar, hyssop and ¾-cup of water, and bring to a boil over a high heat. Boil for fives minutes then shut off and cool completely. Pour the sugar through the sieve, and discard the tomato pulp and hyssop.

Mix the vodka and agave into the tomato mixture, and chill in the refrigerator for a few hours. 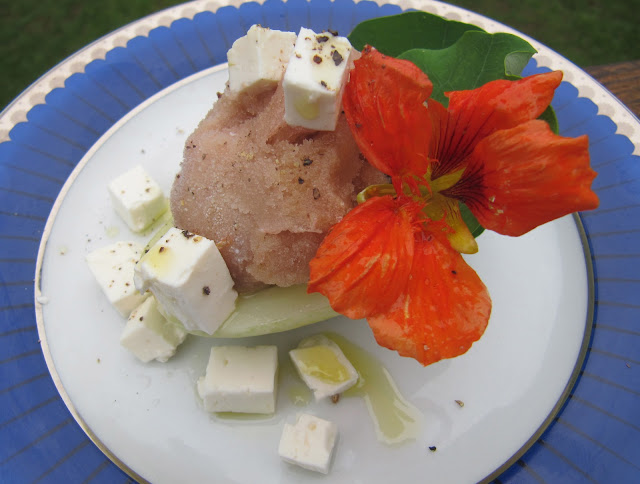 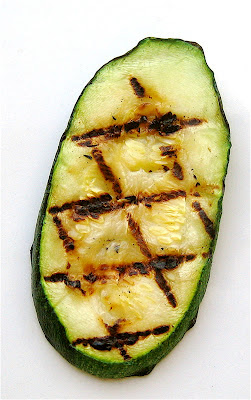 So the Fourth has come and gone, and the official season of the grill is in full swing. I will admit to being right there, at the top of the bell curve rarely utilizing the oven to make dinner this time of year. And yes, many of the sides I make this time of year are raw, from the garden, salads that are “cooked” more likely through exposure to salt and/or vinegar than radiating heat. Soaring temperatures and humidity is showing no signs of easing up, and I am no than glad to cook outdoors.  In my heart I am a wood or charcoal griller, however, when you are in a relationship and have to negotiate the purchase of mutually used items I confess we have a propane-fired number. In order to get the smoky notes that only wood can give I use herb stems, garlic and onion peelings, or any aromatic trimming that might otherwise land in the compost pile to lace so much of what I grill. Placed either underneath the food itself or over the high flame of an indirect set-up I am constantly looking to add that note of cooking al fresco. Because all the caste-offs I use are still “green” they do not catch fire, but rather smoke, which gives my that primal taste I crave.

Though there are times I actually have to turn on a burner to boil water for some grains or blanch, ever so quickly, a vegetable. Still not sure if I made a mistake and did not get the grill with a burner unit – I figured I would constantly be battling with the evening breeze.

I have put us on a once to every two indulgence of b-b-que ribs or butt. And the reason for this is that we both require a slab each (at a minimum) and 5-pounds of butt is gone by lunch the next day. Clearly, we have pork control issues. While I tend to be a dry rub kind of guy once in a while I like it wet, however, I can not imagine using any of the commercial sauces out there for they are too sweet, too ketchup-based and not nearly as complex as I like it. Why don’t I just remember this in May when the temperatures are still kitchen friendly, and just put up a couple of jars? 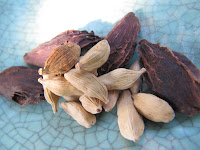 Combine all ingredients in a 1 quart sauce pan and bring to a boil. Lower the heat and simmer for 30 minutes. Fish out the 5 cardamom seeds and discard.  Place the remaining ingredients in a food processor and blend until smooth. Store in the refrigerator. 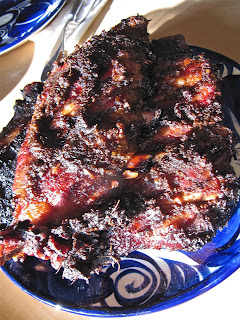 From the smallest of seeds grows one of the most sweet, overlooked and versatile of summer’s gifts. Growing about two feet high, and laterally spreading with equal dimension I am talking about husk tomatoes: ground cherries, or cape gooseberries, the latter name due to their introduction to South Africa, exhibits few of its tomato family traits. I came across them about a decade ago at a farmer’s market and assumed it was a tomatillo. The grower informed me that it was a fruit that had savory tendencies, which was more than enough to seal the deal. Plus, I live by the credo, if I haven't seen it before I must try it. Regardless of the name you find them under, grab them, you wont be disappointed. 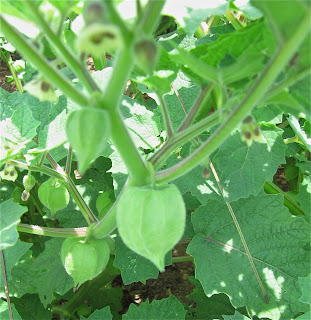 This South American native is easily missed, for at a glance you think you are spying a diminutive tomatillo, its cousin, due to the papery jacket (called a calyx) that conceals the ripening fruit and a dense meaty interior. However, unlike its larger, far more tart doppelganger the husk tomato is edible when the outer husk dries and turns a pale brown, and the fruit itself is a golden-orange -- the green, under-ripe ones should be voided, leave the Salsa Verde for the tomatillo.

When ripe they fall to the ground and continue to ripen, and it is best to store them in a cool, dry spot, for up to a few weeks making them even more explosive (keep them in their husk). Their nature of needing to fall from their branch telegraphing their readiness makes them not a particularly viable commercial plant, even though, they have a strong shelf life and dynamic flavor, which is a benefit to those of us looking for foods that have not been over manipulated in a laboratory and the industrialization of our foods. At only a mere 75 calories in a cup they deliver a good dose of vitamins A, C and B-3 beyond the pleasure they give your mouth, so why aren’t they touted as enthusiastically as the blueberry? Do they need to get an association? The flavor is an intense pineapple-like sweetness with an almost cheese-like finish. Eaten mid to late summer you will most likely find yourself popping these “tic-tacs” into your mouth leaving a trail of husks as you walk home. I would not stop there for they demonstrate great adaptability in the kitchen. Tossed with corn, chili and cilantro for a prefect summertime salad or paired with blueberries and white chocolate for a decadent bread pudding. I won’t forget to make some preserves with them as well with a hint of rose petal or pineapple sage.

If you have a bit of space and the desire, husk tomatoes are easy to grow, which is some compensation when it comes time to search the ground before a chipmunk finds them. Germinate them about 4 weeks prior to the last average frost indoors – they will take about 2 weeks for the seeds to sprout. Give them about 90 days of warm, sunny weather, and you will find yourself crawling on hands and knees to collect these gift-wrapped orbs. Less arduous and definitely less dirty, start hunting your farmer’s markets starting July in the south and on the west coast, or a month later in the north for these special treats and let’s make this New World native one of the delicacies we pine for every summer.

Cut the corn kernels from their cob and place them in a bowl.  Peel the skins from the husk tomatoes and wash.  Split the chili in half and remove the seeds. Finely dice the chili and toss all the ingredients together. Let the salad sit for 30 minutes at room temperature before serving in order to let the flavors meld.
Posted by Unknown at 12:55 PM No comments: