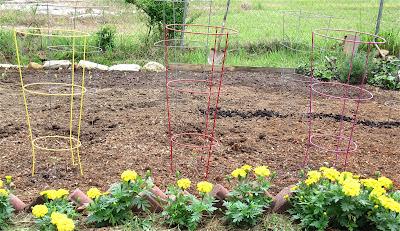 It is good I make my morning rounds like a doctor checking I on their patients, filling in notes on a make-believe chart, for the other day I grabbed my mug, slipped into my Wellies and started down to the garden. I heard a gentle rushing sound, and then stepped in it. We had left the hose running all night, and on the downward slope of the garden a flood. I panicked, and in a scene from a movie I dropped my cup and tore ass for the spigot. Now, the backstory is the hose was damaged, and we were in the throes of fixing it when we realized we bought the wrong sexed connector, so there was no nozzle attached. Who turned the water on between realizing we had the wrong part and returning from a Home Depot run with the correct replacement is still a mystery. Saturated was the area were tomatoes, peppers and husk tomatoes had only moved in within a week or so prior. The lemon grass, which I tend to water judiciously, got a month’s worth. Downward the flood plain went on to soak the herbs and spices bed – I think I lost two cumin plants to drowning – past the recently established lavender that will surely start to show signs of overwatering, and under the fence. 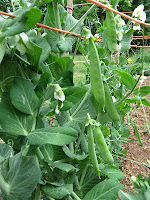 This is perhaps the only fortunate moment that morning gave me because the sunflowers lapped it up, and the adjacent corn seeds exploded into nascent plants. I am so relieved that I had only two causalities from this blunder, and it seems the tomatoes, peppers and husk tomatoes have actually appreciated the folly of our absent mindedness. Particularly since one of the tomato plants is the only one I am sure about, she is my Aunt Rudy and I am counting the days when her plump, blushing ripeness screams, take me. Yes, it helped that the following days were cloudless and un-seasonally hot so no one had to stand with wet roots diverting a sub-terrain disaster. I will work my hero status for a while particularly when I am being accused of being too neurotic, clearly you can never be too neurotic. 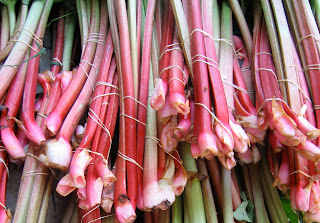 Posted by Unknown at 4:25 PM No comments: 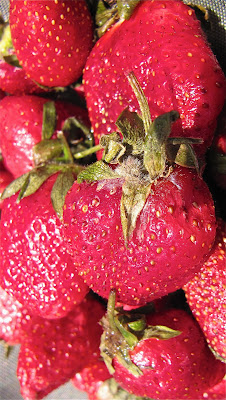 Being on just the southern side of the Appalachian Mountains I get a quicker warm up into spring with a frost free date of mild April (though this year is going to skew the average considerably). My tomatoes, peppers, zucchinis, black-eyed peas and cucumbers are already in the ground as well as basil, cilantro, hyssop, summer savory and dill. The husk tomatoes, sugar baby watermelon and cantaloupe wait in their cells to be transplanted into solid ground. My radishes are being sliced nightly tossed with my arugula and rossa lettuce. I hope the nasturtiums pop a flower or two before the lettuce leaves are completely spent for a peppery garnish.

It seems this year my mind has not raced to abundance of the farmer’s markets as it has in years past. Usually, by mid-April I am biting at the bit for some dirt encrusted something but I have been satiated by the luxury of walking out my back door. However, not all pining’s are quenched by a quick grazing through the yard. I wish I will be able to get fiddlehead ferns but they don’t occur down here as well as ramps. Fortunately, I found myself up in the mountains over the weekend, and even if the urge is not a pregnant as I usually expect it to be, I made a beeline early in the morning for a market. And low and behold I found what I was seeking – ramps. So, a craving was met and they were terrifically stinky. But this warm spring brought an unexpected find, strawberries. I cannot even describe the perfume that filled the car on the ride home, or the sweet assault that greeted in the morning as I went to grind my morning beans. The strawberry plant in my garden has just started to put out flowers with a few still albino fruits making their way to the ready. We have enough to pop in our mouths for a couple of days, and the rest have to be processed. These are not Driscoll’s engineered berries that withstand cross-country journeys they will quickly start to breakdown sending an invitation to every fruit fly in the county to feast. 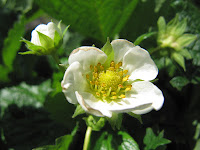 Their aroma is a celebration in itself and I would love to be seduced daily by the wafting of spring’s crimson seducer. While home offers plenty of indulgences one cannot forget the thrill of a market and the unexpected. 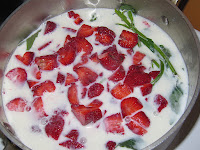 In a 2-1/2 quart saucepan bring the milk, hyssop and 1-cup of the strawberries to just below the boil over a medium heat.

In a work bowl beat the sugar and egg yolks together until pale yellow and slightly thickened. Once, the milk has heated slowly add about a third of the warmed milk into the eggs, whisking continuously. Add the tempered egg mixture back into the remaining milk, and cook over a medium low heat until the sugar has completely dissolved, stirring constantly with a rubber spatula. Pour the milk mixture thorough a fine sieve, and refrigerate it until cold. 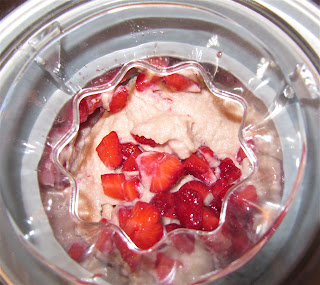 Place the chilled milk mixture into the freezer compartment of an ice cream, and proceed occurring to the manufacture’s instructions. Just prior to removing the ice from its freezing compartment adding the remaining cup of chopped strawberries. Remove the ice cream to the freezer.
Posted by Unknown at 6:57 PM No comments: 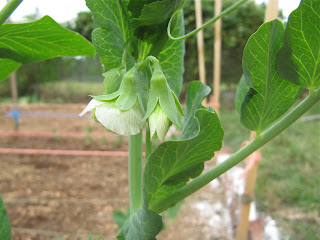 That equinox did set off a flurry of activity outside. The pear tree became showy in a temporary coat of white flowers; cardinals, Robins and finches returned looking for seeds housed in the feeder suspended from a crape myrtle branch. The field beyond the yard soon became awash in pale hues of yellow, lavender and white as delicate wildflowers collectively made a grand display of it. Dandelions awoke as well, and I wished I like their bitterness for then I may be more tolerant of their pervasive nature. Instead, with trowel in hand I dig up the root stem hoping I got it all waiting to see where another will emerge. The lettuce I sowed a month earlier is joyfully growing in these temperatures and I dare not let it know its days are numbered. Arugula , beets and carrots are on course for a late spring bounty, and the first to arrive, the radish has already been sliced up. With the generosity of Mother Nature even my peas are climbing the ropes strung between stakes. 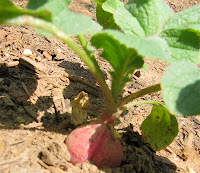 Spring hit without any loin’s roar, and after last year’s blunder with my attempt to raise peas I was worried the immediate warmth would mark another year of thwarted growth. But I spent the first few weeks watering their spot with iced water in the hopes it would keep the earth cool enough for its liking. The subsequent emergence of their ruffled leaves gave me great relief and pleasure. And now, as of yesterday, I have flowers! So, tempting to just snack on the sweet petal but I must keep my eye on the long view, and the pods I have waited over a year for. 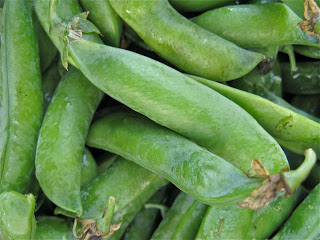 Thinly slice both the celery and radishes. Then toss all the ingredients together, and refrigerate for a few hours before serving.